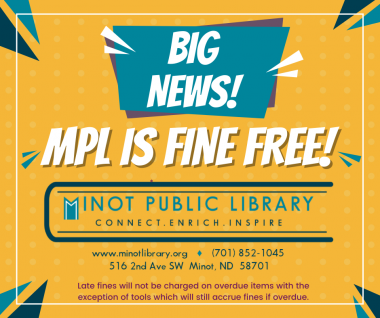 “The Library hasn’t been charging fines for children since July of 2019 and had removed all fines in March of 2020 due to restricted hours caused by the pandemic,” Library Director Janet Anderson said. “Staff used this time to collect and compare some data before making a recommendation to the Library Board.”

However, Anderson explained that the numbers weren’t the main reason behind this decision. In 2019, the American Library Association adopted a resolution that stated overdue fines create “a barrier to the provision of library and information services.” Further, a 2013 study stated “Reacting to fines, or just fearing such expenses, parents and caregivers in poor families may make a rational decision to not allow their children to get a library card or to check out books that might get lost.”

“At our July Library Board meeting, we also approved a new Mission, Vision, and Strategic Plan for the Library,” Anderson shared. “Our new mission is to be the center of information and exploration for the community while keeping our core values to connect, enrich, and inspire the people we serve.” A major part of the Minot Public Library’s new Strategic Plan is to prioritize inclusion and the Library Board agreed that penalizing users does not promote inclusion.

Many libraries throughout the world are making this change and seeing not only an increase in library users, but also an increase in the number of items being returned. When the San Francisco Public Library was making the decision to eliminate fines their administration made the case that despite these positive increases, the primary reason was to reduce the inequitable impact of overdue fines. Their executive summary to City decision-makers stated: “Many patrons face overdue fines, but for those without disposable income they can be difficult to pay off. A fixed-rate fine policy is inequitable in that it most harms individuals already facing financial insecurity.”

Anderson understands that there may be some concerns about this decision, but says that eliminating fines doesn’t eliminate accountability. “When items become overdue our patrons will still receive regular reminders and won’t be able to use Library services until overdue items are returned.” In an effort to reduce the amount of reminders and staff time involved, the Library will also begin automatically renewing items checked out. Eligible items will be renewed the day before the due date. Further, patrons will continue to be responsible for the cost of lost or damaged items.

“The existence of overdue fines, and the fine payment interaction itself, is one of the most negative aspects of a patron’s relationship with the Library and we’re hoping to promote more positive experiences at MPL,” Anderson summed up. The Minot Public Library is located at 516 2nd Ave SW and can be accessed from 1st Ave SW (near iKeating Furniture). More information on library services can be found online at www.minotlibrary.org or by following the Minot Public Library on Facebook and Instagram. Anyone with questions can contact Library staff at (701) 852-1045.